Bhopal:
Kishori Ahirwar, the girl’s maternal uncle, who lives in Patan village of Bijna, 40 km from Chhatarpur district headquarters, said, My niece Preeti was playing by the river with her two friends at 10 am on Wednesday. The nearby area is wet due to which Preeti got buried in the mud. Her two friends who were playing with her started crying.
Hearing her voice, I reached there and saw Preeti buried in the mud. I got it out somehow. Bijawar was rushed to the hospital. Doctors referred him to Chhatarpur District Hospital as his condition became critical. He died while undergoing treatment here.

They wandered around for 2 hours but could not find an ambulance
“I asked for an ambulance to bring the body home, but I didn’t get an ambulance. I wandered around the hospital for 2 hours. It was night, so I wrapped the baby in a sheet and put it on my shoulder. . Walked. He took a rickshaw from the intersection and reached the old Bajawar bridge. From here the bus came to the village.
Preeti’s father, Rameshwar Ahirwar, is an alcoholic, so a year and a half ago, the young man brought his niece to his village Patan. He was dreaming of her studies and a good future.
Officers absconding from responsibility
The local MLA recently handed over the body to the hospital. Yet he is not able to reach the needy. District Hospital Civil Surgeon Dr GL Ahirwar says the dead body given by the MLA is with the Samarpan Club, so they run it. Why they did not provide a car to take the child’s body to the village, only they will be able to tell.
Hari Agarwal, secretary of Samarpan Club, said that no one from Bajna area came to us to collect the dead body. If he had come, he would have sent, because it was a matter of a little girl. On Wednesday, 3 bodies have been sent to their homes by vehicle.
The father put his newborn son’s body in the trunk of a motorcycle when an ambulance did not arrive at Sangruli District Hospital. Their village is 50 km from Sangruli headquarters. Earlier, the couple approached the collectorate and complained. The Collector has ordered the SDM to investigate. Dinesh Bharti is a resident of Bijpur.
The latest case of non-availability of a vehicle to transport the dead body in Panna is from Panna district. Where Phulare Chaudhary, father of Saurabh Chaudhary (5), a resident of village Rajpur of Samaria police station area, deteriorated due to double pneumonia. The family admitted him to the district hospital, where the child died on Friday afternoon. After that, the relatives kept demanding the deceased from the duty doctor and the staff, but no one listened to them.
After waiting for about an hour, Phulre left the body of her child with the liver and left for Rajpur village, 80 km away on a motorcycle. Tell that along with the district hospital, the municipality also has a hearse available. Even then, people are worried.

September 3, 2022: The body of a youth who drowned in a river had to be carried on a motorcycle Hashim (28) drowned while taking a bath in the Parvati river flowing between Sehore and Shajapur districts. He was a resident of village Chinese police station Kalapipal. In the meantime, other children and youths who were bathing with him raised a noise, after which a crowd of villagers started. As soon as the information was received, Mandi police from Kalapipal and Sehore in Shajapur district reached the spot and NDRF teams from both the districts arrived.
A 30-member team pulled out the body from the water and handed it over to the relatives, but no body could be found to take it to the PM Hospital. The relatives were forced to take the body on a motorcycle. His video is going viral on social media. 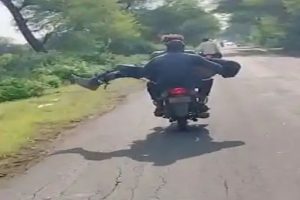 Jamintri Yadav, a woman from Godaro village in Anuppur, Shahdol, was admitted to District Hospital Shahdol due to chest pain. Since there was no improvement in the condition, Jamintri was referred to the medical college at 11 pm. He died at 2.40 pm during treatment.
Sunder Yadav, the son of the deceased, accused the nurses of the district hospital and said that the hospital is being negligent. Due to which there was no improvement in health. When the nurse was asked to see the patient, an injection and a bottle were given.